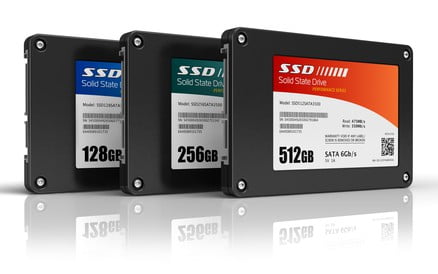 Solid State Drives (SSDs) are one of the newest innovations in technology under the broad umbrella of storage devices. Its predecessor, the hard disk drive, is still a part of the technology scene. Larger HDDs are being developed to cope with the demand for storage across portable and fixed computers. Currently, Solid State Drives are expensive because of their high per-megabyte cost. Namely, many times more than HDD’s.

As of April 2018 prices have dropped dramatically. Because of the difficulty of finding sales for high-volume SSD’s, not many of them are produced for the consumer market. More often, smaller, more reasonably priced SSDs are built for the everyday user. Thus, everyday users don’t fork out the cash to buy an SSD for long-term storage. Users would rather purchase them for the speed boosts. Furthermore, they increase booting times and operating system functionality. As an everyday consumer, you should consider if SSDs are right for you.

SSD costs in 2019 are dropping fast. eProvided has its eye on this market. Above all, people spend more on solid state disks in 2019. In other words, SSD failures cost more. As a result, data loss hurts much more. eProvided comes to the rescue with file recovery just in case. Learn more about eProvided SSD Data Recovery.

The Pros of SSD’s.

SSDs are noted for a few very important things above HDD’s. At the top of the list is speed. An SSD usually boots very quickly. Specifically, system load speeds are increased. A boot under a minute is likely. On the contrary, traditional HDD’s can take a long time. SSD’s don’t have to worry about spin-up time or moving platters and heads. Similarly, they operate faster than a traditional HDD. Because of this lack of moving parts, SSD’s also demonstrate a remarkable amount of durability. They are easier to carry about in case of an emergency.

Solid state drives are less likely to be damaged during a drop. Traditional HDD’s tend to speed down over time because of the way that files are stored. As time passes, files on an HDD become fragmented and take much longer to access. The reasoning is simple, sequential file parts are not contiguous. SSD’s don’t have this problem. Therefore, access times and location of file parts are irrelevant. What are some things that SSDs are good at? The one benefit that stands out most in comparison to HDD’s is the speed element.

The Cons of SSD usage.

Why haven’t SSD’s taken over the market by storm, then? Why are we still using HDD’s? The long and short of it is that even this amazing advance in technology has its drawbacks. The per-megabyte cost of the SSD’s as mentioned before is a major limiting factor. It is unlikely that most consumers are able to afford high-volume SSD. The highest capacity SSD offered for commercial consumption today rounds out at 30 TB, with more affordable versions around the 500 GB to 1 TB range.

SSDs are also prone to being burned out more quickly than HDD’s. The flash storage on an SSD can only be rewritten a certain number of times, and after that the sector becomes unusable and so the SSD transfers to the next available sector until the disk is completely depleted. Depending on the use of the drive, the SSD can become depleted very quickly. There are ways of recovering data from an SSD. These are expensive and require file recovery experts like eProvided to give assistance. Even so, it is a possibility that not all the data you have on the drive will be recovered.

When should I use an SSD?

Using an SSD for booting is the most common application of this bit of hardware. Boot times are reduced many times over, and the operating system works much more efficiently when it boots from an SSD. Because of the low traffic nature of an operating system or boot partition disk drive, it’s likely the drive will remain viable for a long time. It is not, however, a good idea to use it as a portable drive for storage or raw files that need to be rewritten on a day-to-day basis.

The more rewrites, the more the flash memory is being used. Therefore, the chances are higher that the drive will fail. It should be noted that data recovery from an SSD can be time-consuming. Costs also increase since it’s more complicated than data recovery from an HDD. It is better to keep non-sensitive information Vs. critical information on a SSD. Some recent SSDs on sale.

At the end of the day, your drive choice is your responsibility. However, knowing how much more efficient certain types of drives are in certain conditions allows you to make the best choice possible for your configuration. An SSD is a brilliant new piece of hardware that can significantly improve boot times and lower stall times in your operating system. It is not, however, built for writing and rewriting that is typical of most other HDDs. To this end, in order to determine if an SSD is right for you, take into account the type of work you plan to be doing with it and how often it will be used. Using this, you can figure out if this sort of hardware would suit your needs or if you should just stick with HDD’s.