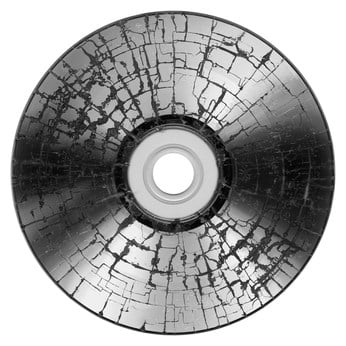 In the recent past, optical media has embraced the use of CD’s and DVD’s as a means of storing data. CD’s or DVD’s are optical media developed to store information for an unspecified period of time but keep data safe so it can be readable in the future. CD and DVD burners have advanced by leaps and bounds from their original classification. There were times not twenty years ago where burning a CD was not possible above 1x speed, requiring about forty-five minutes to be expended to create a single disc. Speed has increased to the point where burners now get up to 52x in speed, allowing a CD or DVD to be burned in mere minutes. The downside of this is the longevity of the data. Data burned at that high speed doesn’t tend to keep its fidelity over large swathes of time. In order to understand how CD’s and DVD’s can go bad over time, we must first examine their construction.

The Make-up of CD’s and DVD’s.

CD’s and DVD’s are made up of a series of overlaid layers to form a disc, no more than 1.2mm thick and varying in width across the face. First a layer of plastic is embossed with a series of bumps in a single, contiguous pattern starting from the inner rim of the disc outwards in a spiral format. On top of this plastic is a layer of aluminum, spread to cover the bumps on the plastic. A layer of acrylic is sprayed atop the aluminum to protect it. A label might be affixed to the other side of the disc if so desired. Data is stored on these optical media by making markings that allow the bumps to be outlined or flat. These correspond to digital, binary data which can then be translated into commands or programs within a computer operating system. It can also be used to store audio and video data, but storing this type of data in raw CD or DVD format is an inefficient use of its storage capacity. Considering that one music CD can store a maximum of twenty one tracks in audio format, but can keep up to one hundred of those tracks in lossless MP3 format shows you how inefficient using the raw storage protocol is.

How long do DVD’s and CD’s Last?

As mentioned before, this is a combination of the fidelity of the media and the speed at which the original data was recorded. We must also factor in the durability in construction of the medium. Originally, in the late 90’s when optical recording media was first being mass produced, the average shelf life of a CD or DVD was around forty years. However, because of CD/DVD rot, the data that is stored on these discs is not safe from the ravages of time and it is understood that a safe estimate for fidelity of well-recorded data is about twenty-five years at best. Speed is of the essence when it comes to recording information and quite a lot of people tend to speed their data recording up to the fastest speed supported by their drive. The result is that data stored this way can become corrupt easier than data recorded at the lowest recording speed the drive is capable of. In this day and age, although optical media might seem like an attractive alternative of off-site data storage, you need to be wary of keeping sensitive information on these discs that you may have need of ten to twenty years from the initial date of recording.

When a CD or a DVD is damaged, the reading drive will often try to recreate the data via interpolation. This usually only works with audio CD’s and video DVD’s, since interpolation is possible with the level of data compression that these media allow. However, when it comes to data discs, recovery can be a whole other matter entirely. Data discs need a more rigid error correction code (ECC) to function properly when damaged. Even so, some discs are damaged beyond the ability of a drive to interpolate for the missing bits. Software is available to help with data recovery, but this software can only do so much. If a disc has gone beyond their ability to recover the data, the only other option is professional recovery services, like eProvided. Professional recovery can retain most of the data on the disc, but it is still possible that some will be beyond the abilities of any recovery methodology.

Data recovery for CD’s and DVD’s is something that many millennials are now looking at getting because of their widespread usage of this type of media in the late 90’s and throughout the 00’s. Data that was stored on these optical media discs have now gotten so bad that they cannot be read. As can be seen, this was of no fault of the people doing the recording, but that is of very little consolation when you want the data on the disc recovered. In order to get at least some of the data off the disc, you should consider one of the many programs available for data recovery. However, the safer and more viable method would be to contract a professional data recovery firm like eProvided to assist you in getting back those memories you have stored on magnetic media.