To illustrate, microSD card speed using ‘The Tortoise And The Hare’. A fable most of us know by heart. And if we don’t know the story, then we at least know the lesson. The tortious appeared slow, but he was steady. The hare was fast, but he wasn’t consistent. In the end, the tortoise won the race because he didn’t slack off like the hare. It was a life lesson illustrating the payoff of persistence and consistency versus the consequences of slacking off and underestimating. 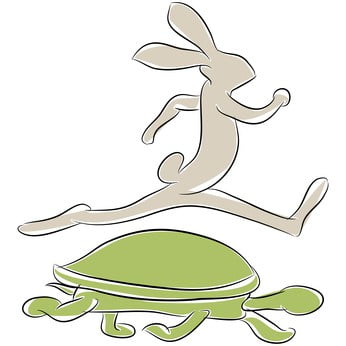 The market today is populated with numerous microSD cards, all clocked at various speeds. Most consumers look at these memory cards and feel like they’re reliving The Tortoise And The Hare, but the question is whether or not faster really is better when it comes to these handy flash storage devices?

The Choice of Performance.

Different types of flash memory are used by different manufacturers to create SD memory cards. Therefore, the actual transfer speed of each card by each manufacturer can vary. As a result, it’s difficult to determine which microSD cards will provide reliable speeds.

Most SD cards are used in mobile devices ranging from cell phones to handheld video recorders and digital cameras. The speed of a card becomes particularly important when taking video because it affects the smoothness of the playback. When picking a microSD card, the speed of the card you choose is your choice of performance.

When looking at microSD card speed and the competition, the first question you need to ask yourself when it comes to speed is how much you’ll need. Certain file types, such as HD videos, require a minimum writing speed to guarantee smooth video playback.

The standard SD card is slower than the SDHC and SDXC cards. The SDXC offers the highest speeds and the lowest compatibility. The SD card is the slowest but most widely compatible card, followed closely by the SDHC & SDXC. it is best to use faster microSD cards. Above all, slower SD cards can become overheated and fail. In the event they do fail, eProvided will recover lost data on your microSd card.

Why microSD Card Speed is Crucial.

At the end of the fable, it wasn’t speed that won the race for the tortoise; it was consistency. When it comes to SD cards, speed is important to a degree. The faster the file transfer speed, the less risk there is of corruption or malfunction. However, the importance requires a balance. Your file transfer speed will only be as fast as the slowest BUS speed. When choosing your microSD card, be sure to choose the one that is most consistent with your devices. It will provide the best possible interface, ensuring you’re not too fast or too slow, but running at just the right speed to win your data race.